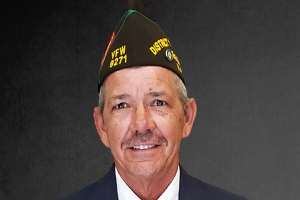 Robert Cooper from Tonganoxie, KS
Robert has been a member of the VFW for 8 years and a Life member of Post 9271 in Tonganoxie, KS. Robert earned his VFW eligibility serving in Korea and Dessert Storm.  Robert has served many positions in his Post as well as District.