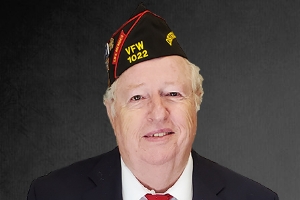 Norman (Norm) Gentry of Neodesha, Ks
Norm received his eligibility to the VFW Serving in Vietnam while in the Air Force and is a Life Member of Post 1022 of Coffeyville, Ks. and being a member of the Veterans of Foreign Wars since 1973. Norm has been the Special Aide to the Department Commanders for 38 years and currently the Special Aide to the Current Department Commander.