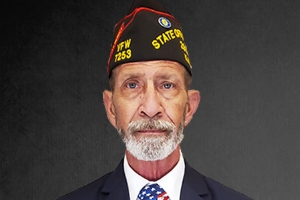 Terry Fletcher of Derby, Kansas
Terry has been a member in the VFW for 13 years and a Legacy Life Member. Terry served in the United States Navy from July 1977 to July of 1983. Terry earned his eligibility while serving in the  waters of the Mediterranean and Indian Oceans. Terry has served various positions in the Post, District, and as Department Officer of the Day.