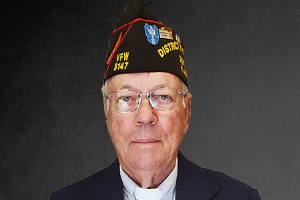 Terry Warner from LaCrosse, Ks
Terry has been a VFW Member for 9 years and is a Life Member of VFW Post 3147 located La Crosse, Kansas. Terry earned his eligibility to the VFW while in the Army Serving in Vietnam. Presently he is the Chaplain of his home Post and has been through the chairs in the 7th District. In 2018-2019 he received the distinguished honor as being selected National Ade-De-Camp.
Terry is an Ordained Minister through the National Association Christen Ministries and has maintained an Assistant Funeral Director License for the State of Kansas for over 10 years as he works for Janousek Funeral Home in La Crosse.
Terry is active in the American Legion in his home town and is a avid Private Pilot with an Instrument Rating.